Living in a 1913 California bungalow is a setting for the simple life and a more direct connection to nature, place and season. Classic bungalows were oriented sympa 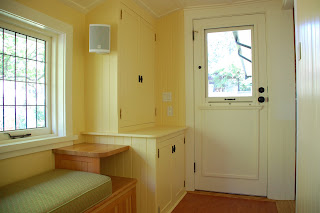 thetically to landforms and to capture climatic effects via solar angles, elevation, and kinetic connection from inside to out. Designers used built-in features to tap natural effects of warming and cooling in novel ways: cross-ventilation, porches for shade and breeze-trapping, double-hung sash windows, casement windows, attic venting – and in kitchens, the curious device of ‘coolers’.

Bungalows are a single story building type with all the principal rooms typically gathered under a gabled roof form. They have broad, overhanging eaves and are most often made entirely of mill-run wood. Defined as mass residential housing by waves of suburban building in California, bungalows often have battered piers (split-rock, boulders or brick) supporting a projecting entry porch. Our California bungalow sits high atop a hill, its long walls facing east and west, with a gracious entry porch between two projecting bays. A modest 1350 square feet in roofed-over space, this bungalow incorporates many natural ventilation techniques that help cool it in hot weather and freshen the air in all seasons.

No, I’m not alluding to drafty sash windows, although air deliberately drawn through these adjustable openings does cool our interior in summer and keep it fresh year-round. Bungalow designers used cross-ventilation to create a home that could breathe and air itself without mechanical assistance. Borrowing atmospheric effects often involved adapting traditional European and Indian techniques for cooling and flushing buildings in hot climates. The bungalow of course was originally a Bengali building adapted by the British for imperial uses, eventually migrating to California where it was reinvented, first as recreational housing and then as suburbia.

One intriguing application of natural cooling in bungalows was the Cal 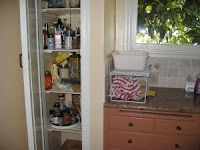 ifornia cooler, in essence a specialty cabinet with two vents to the exterior, one up and one down. The vents combined with porous shelves to enable an airflow to occur with a gentle cooling effect. Vents were typically covered with wire mesh, to keep bugs and critters out, with sliding covers or doors to adjust air flow. These meshes were sometimes so fine they actually impeded air flow and so undermined the desired effect. Many contemporary owners discover these openings but have difficulty comprehending what they were intended for.

Here's how Thy Tran, a San Francisco Bay-area foodie, describes the cooler's use:

"If you live anywhere near the Northern California coastline in a house that was built during the first two decades of the 20th century and if you haven't had a chance or don't have the heart to remodel your home completely, then you probably still have a strange, little cabinet in a corner of your kitchen. Unlike the other cabinets in the room, it has open shelves of wire or slats or perforated wood. It also feels very cold and breezy, and you might even be able to glimpse sunlight through the back of it if you stand at a certain angle and tilt your head a certain way. It may have a lock or, at the least, a secure latch. This, my friend, is a California cooler." 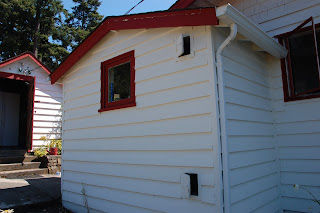 so if one gives it a conduit to rise through, cooler air is drawn in to replace the exiting hotter air. Depending upon where the lower vent was placed, air drawn in would be more or less cool and storage of perishables would be enabled. Most California coolers were built into exterior kitchen walls, as cupboards with openings directly outside. As early bungalows were sometimes built on crawl spaces, later on basements, cooler air might be drawn from below ground. Or more often, as in our case, simply drawn from ground level. Any difference in level of vents can generate air flow and cooling effects. Wikipedia 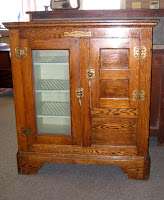 the first homes to come wired and equipped with most of the modern kitchen appliances, but electrical refrigeration wasn't widely available until well into the 1920s. So cooling cupboards in early subdivision bungalows may have been the primary way of keeping foods cool. Many bungalows would have been equipped with wooden ice-boxes, a precursor to the refrigerator that used block-ice for cooling. In locales with frigid winters, ice was harvested from lakes and ponds, stored and supplied weekly to homes with ice-box refrigerators; in the early twentieth century, ice blocks were mechanically produced and delivered door to door. A California cooler provides a place to store things that need cellaring rather than refrigerating, like the fresh greens picked from the garden out back, kept conveniently close to where cooking happens.

Thy Tran credits bungalow designers with innovation: "In the days before easy electricity and Freon there was cold air from the ocean to keep your root vegetables crisp and your ham succulent. In San Francisco, a city built on sand, California coolers replaced the Midwestern cellar as a family's depository of food. An ingenious architect came up with the idea of a louvered box attached to an outside wall of the building. With some open shelving and an easy-access door right from the kitchen, busy housewives could stay close to their pantry staples."
In fact, whoever contrived the California cooler was recycling an old idea common in England prior to refrigeration, where homes were equipped with a 'meat locker' to store the salted and preserved meats and cheeses of the time. 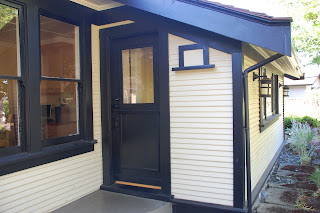 ngalow? Well, often by inference only, as these things have tended to disappear with modern renovations. It took me a while to figure ours out, beginning with what appeared to be the frame of a single small door still intact on an outside wall of our house. New to the bungalow idiom, I was baffled by the door, especially as it was now only a frame with solid wall behind it. Then I realized it may once have connected to a partly intact interior cupboard in a corner behind the back door.

Efficient use of limited space was a principle of bungalow design, reflected in their having the first motion-minded kitchens in modern homes. Tapping the natural effects of air currents was highly efficient, as the resource was free and could be unobtrusively drawn into buildings as needed. California coolers are also consistent with the bungalow precept of using wallspace for built-ins that cut down on free-standing furniture and appliances.

Unfortunately, coolers often fall victim to kitchen renos because they’re inconsistent with contemporary norms and notions of kitchen use. We grow and store less and less of our own produce; our kitchens are more seen as places for gathering and assembling, less for storing and cooking. The California cooler is, however, an idea that can be adapted for local food growing and simple living. Here's how Thy Tran uses one today:

"Currently sitting in my California cooler are some onions and garlic, som 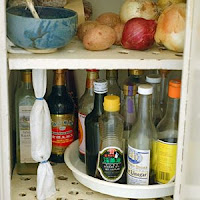 e potatoes, lots of vinegar and oils, a few heavily brandied fig and almond cakes from last Christmas, and a cloth-wrapped hunk of what will, I hope, become duck prosciutto by the end of next week.

"Many modern designers remove these cabinets entirely, but I love when homeowners retain the cooler in their modern kitchen. There really is no better way to keep ingredients for weeks and months at a time in precisely the cool, dark, well-ventilated, and off-the-grid way that is best for the food that sustains us. What are you keeping right now in your California cooler?"

Our bungalow, it turned out during renos, originally had a second cooler in the kitchen, the remnants of which were exposed when we stripped the room down to the studs and discovered rectangular openings covered with mesh letting onto a now-enclosed wall stack. We left the evidence buried in the wall, but didn't attempt to revive the cooler due to severe spatial constraints.

Confirmation that the small frame on the wall beside our back door was part of a cooling cupboard came when I obtained an architectural floorplan of the original house. There in the corner behind the porch door was a boxy cupboard with ‘cooler’ written on it, part of a sleeping porch with shutters in place of glazing. While we are uncertain about the original shape and finishing, the base of the original cooler still functions as cupboarding to this day. [pic]. Early bungalows were deficient in cupboard space for most every use by contemporary standards – as designed, they were trying to be vehicles for a more simple life, not to facilitate collecting.

Little has been written about these coolers other than by homeowners working for authentic restoration of their prized bungalows. While such passive cooling techniques predate California’s love affair with modest bungalows and the simple life, widespread use of them is evidence of the blend of old and new at the heart of bungalow design. As such, they embody the spirit of California itself, which from the first stood for more relaxed living in a benign climate and beautiful surroundings. The modern bungalow, with contrivances like the cooling cupboard, was conceived and marketed as an affordable way to open this possibility to the masses.
Posted by David Cubberley at 9:26 AM

What's that rectangle on the wall? 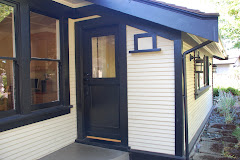 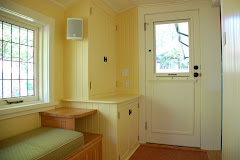 Still in use, but not for cooling 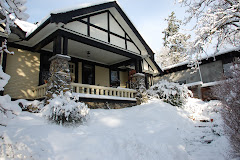 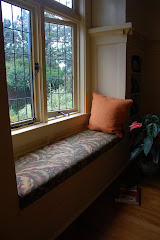 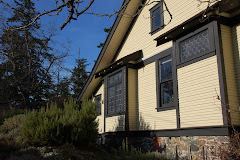 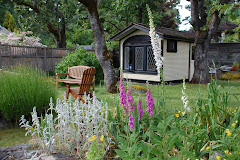 Inside linked to outside

View from a window